sculling for the win

This morning Boy rowed in a club IV Round the Island and looked fairly glum about it. He’s generally a strokesider but for various reasons, including because he can, ended up rowing bowside. He was not entirely happy and, because he hasn’t done it recently, he had a cramp in his forearm from around 1500 metres into a 7000 metre race, so he was at best in a fair degree of discomfort. It was not the most brilliant performance from the crew, which might have been a bit unbalanced overall; but they came second in their category. Photos of that race show him grimacing more than usual.

Then in the afternoon, once again rowing for the club but this time in a 3rd grade quad race, the different and slightly younger crew looked the certainty they proved to be for the gold medals. I’m not an expert so I have had explained to me by someone who is why that crew works so well: its member are much of a height with similar levels of fitness and skill and their techniques are very similar. Damn, they look like a crew to reckon with. And although their coach was a bit glum about the narrowness of their winning margin, because he reckoned that if they’d rated slower and put in more pressure they could have won by a lot more, he was also quick to congratulate them for winning against older crews. Photos of that race show determination and afterwards they show the broad, winning grin. 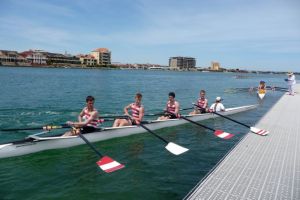 Hard workers lining up for gold

Posted by Felicity from Down Under on November 12, 2011 in Rowing