RSS
← lavender bag tutorial
on the way home from the GP →

I’ve already outlined the first few days of wearing scarves/cowls. Here’s the rest of how I managed to wear me-made during May, although not to any great extent, certainly rarely with anything approaching styling and equally certainly with much repetition; to the point of boredom, really!

Sunday, 6/5: Green and blue scarf, with blue jumper over white T-shirt, blue trousers and green jacket. You’d think I must have been going somewhere to get that dressed up, and so I was. Youngest Aunt and I attended a matinee performance of The Merry Widow, which we thoroughly enjoyed. And on the subject of me-made, Youngest Aunt was wearing a little knitted scarf that I made for her birthday the year before last.

Monday, 7/5:The same green and blue scarf with black jacket and trousers (for work)

Tuesday, 8/5: A by-design casual day at home/out and about, which was unexpectedly warm; so the dodgy Portia top with blue trousers and cardigan fitted the bill no probs.

Wednesday, 9/5: Once again, the blue/green scarf with grey trousers and houndstooth/grey jacket. OK for court; and sorry about the poor photography, but you can see the scarf. I should add that I have a shorter scarf I made from the same fabric about four years ago and I wear that quite often during summer, as it’s short and more decorative than truly functional. 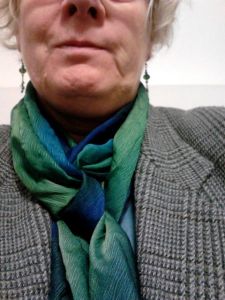 Thursday,10/5: black and white scarf with black trousers, jacket and shoes, and white stretchy top. OK for court, though the matter didn’t proceed. Photographed on phone. Crappy pic, to be sure; I must have been feeling extraordinarily browned off when I took it! Changed to colourful scrappy crocheted Moebius when I came home (because I needed extra warmth).

OK, I match the decor. Can I go home now?

Friday, 11/5: I knew I’d be in court again and that the weather was meant to be slightly warm. I couldn’t decide what to wear but knew the choice would be between blue or blue of some shade with, well, I wasn’t quite sure what! It was blue trousers, once again with the blue/green scarf and the grey sports jacket.

Saturday, 12/5: At home, keeping warm while working in the sewing room for much of the day. Blue bootleg stretch trousers, blue polo-style top and cardigan with the scrappy, crocheted Moebius cowl.

Sunday, 13/5: As it was Mother’s Day and we were having cake and coffee with the nonni, I wore the triangular neckwarmer with yesterday’s trousers and the grey sports jacket. Yeah, I think I need some new clothes! I ended up putting on my old teal lattice jumper (very old; I knitted it in 1984) because I was simply cold and the made-for-me-by-my-Mum shawl, while lovely and warm, was too awkward for work.

Monday, 14/5: The eight-foot-long, knitted side-to-side, three-coloured, linen-stitch scarf, complete with tassels, made its first outing today. I rationalised that I couldn’t really give away something with mistakes in it but I’m sure I could have! Heck, I know the mistakes are there and I can’t see them (not without searching, anyway). I had several comments on how nice the scarf is and how thick and warm it looks. It’s certainly thick and it’s certainly warm, which was a great thing when I was walking home from the bus tonight. The colours are pretty and I took a photo on my phone to prove that I actually wore it. Not that I know how to get photos off the phone and onto my computer, but we’ll deal with that another day.

It really is a lovely thick and warm scarf, and my colleague loves it!

Tuesday, 15/5: So I gave away that scarf, although I wore it to work and out at lunchtime and had put it on to come home again when one of my colleagues, whose elderly mother is presently quite poorly, mentioned how nice it was and I thought, “Well, she’ll probably love it and the colours would suit her,” so I whipped it off and presented it to her, all 75 feet of it including mistakes, as I pointed out! That is, I pointed out that there were mistakes. I didn’t actually point out the mistakes, as I’d have had to have searched to find them. I can knit another such scarf and perhaps make it shorter and wider. Just not tonight, that’s all.

Tomorrow, then, I reckoned I’d be back to my old green scarf or the scrappy, crocheted Moebius cowl, as the weather was decidedly too cold for chiffon fabric scarves. Either that, or I’d have to knit all night and finish off my Stephanie shawlette, which is made with a lovely soft acrylic in a very pretty blue. I pulled it out of the knitting box to check its progress. No, it’s too short and I have to unpick some of what is there because of a very obvious mistake (if not two of them). The trouble is that, being of my own reckoning as it is, I haven’t written down what I was doing, so it might take me a little while to work out the pattern in any case. I keep miscounting the yarnovers, that’s the main problem. In any case, it was clearly not an option for work.

Wednesday, 16/5: It was the Moebius cowl to the fore today. The morning was unfriendly. Boy wore his blazer to school because he was so cold!

Not taken during Me-Made-May, but this is the original long Moebius cowl

Thursday, 17/5: Moebius cowl again (excuse my messy background in the above pic, but it’s better of the cowl than the one I took at work).

Friday, 18/5: A new crocheted Moebius cowl. Yeah, yeah, I know – but it took me only a couple of hours to make and it uses up scraps of yarn that aren’t enough to do anything serious with when looked at individually. Put together? Ah, that’s what scraps are for. Besides, the one I’d worn on Thursday had a pleasant enough aroma of massage oil (post physio appointment) but I didn’t want to be carrying that around with me. Plus, I needed something a bit fancier for an evening outing. 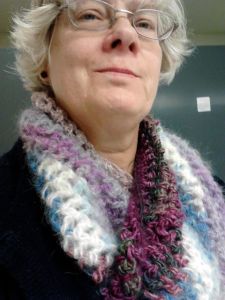 Mixing all sorts of bits of yarn into something warm

Sunday, 20/5: the new Moebius cowl again because I couldn’t be bothered looking for anything else. I washed the original.

Monday, 21/5: With the descent to winter weather, it’s hard to get enthused about anything other than woolly scarves or neck warmers. I wore the older Moebius cowl, which garnered compliments for its lovely colours.

Tuesday, 22/5: Variety – not! – with the newer Moebius cowl, which won accolades from a serious sewist colleague. She recently purchased a dress form to replace one that a so-called friend had broken, and remembers getting her new sewing machine back in the 1970s and feeling as excited about it as if she’d got a new motor car. I recognise that feeling. I shared it when my Mum’s new sewing machine arrived (and it promptly fell to Middle Aunt and me to start sewing on it). It’s the one I’m still using. Middle Aunt now has a newer one which she has used, in combination with her overlocker (purchased for her by Grandpa) to create clothes for all her children and herself quite a lot over the years. She does less sewing these days, being much too busy working and helping run the family business. We exchange notes occasionally, though.

Wednesday, 23/5: What possessed me I can’t say but I wore my little green/blue silky scarf with my grey sports jacket, blue trousers and long-sleeved T. Did I freeze? Only not quite but darn, it was close. Mind you, I had my older Moebius cowl with me as well as a balaclava! When Dr B and I ducked into the shops on our way home, I popped the cowl round my neck. The balaclava, however, I left in the bag. Its time will come. What’s really coming, I have to admit, is overcoat weather.

Thursday, 24/5: The black-and-white scarf garnered praise from my serious-sewist colleague today. But I had my Moebius cowl with me, the older, longer one. I needed it. Apparently today was our coldest May day in 25 years. It was darn chilly, I can’t argue with that. And work being particularly horrid, as it was, I appreciated the hot pack that the physio placed on my neck to help with all the stiffness and pain. It helped combat the cold too.

Friday, 25/5: Today I dragged out my big square of heavy crepe. It’s not really square and I’m not sure if it’s crepe but it’s a crepey style of fabric, to my eye. I’ve had it for a very long time. I bought the remnant well before Boy was thought of, and I would suppose I had something in mind for it at the time. History does not record what that might have been! I decided a few years ago to rescue it from obscurity by overlocking a rolled hem and calling it a big scarf. It’s good because it’s big and a reasonable weight, so I can almost make it double as a lightweight shawl. I like its autumn tonings.

Saturday, 26/5: I wore the same scarf/shawl as yesterday, tucked into my old orange cardigan; not exactly a culture clash but not quite the same shades. It looked all right on a Skype call, anyway, so no complaints.

Sunday, 27/5: I just couldn’t be bothered today though I ended up with one of the cowls for a while late in the day when I suddenly became rather cold.

Monday, 28/5: Out came the shorter crocheted Moebius cowl again, though not all day.

Tuesday, 29/5: My old green garter-stitch scarf came out to play today. It’s something I knitted to occupy me while Boy was having swimming lessons when he was quite young. It’s functional and I like the colour though it really doesn’t look quite right with the duffel coat, which is a different sort of green! I didn’t take a photo and could only find one old photo where it sneaked into the shot but not in any meaningful way. So, you know, it’s just green and plain and long enough without being too long.

Wednesday, 30/5: Once again I wore the shorter crocheted Moebius cowl for most of the day

Thursday, 31/5: I was at home with a respiratory unwellness (I had to get out of bed and dress because I was coughing too much lying down, there is no justice in life I tell ya) and simply could not be bothered trying to find a me-made anything to wear. I washed two me-made beanies (they’re Dr B’s, though I’m thinking I might appropriate one now that mine has gone to Nonno and, really, Dr B doesn’t need two practically identical beanies – both dark red, knitted to the same broken-rib pattern – does he?), the triangular neck cosy and the shorter Moebius cowl, since I was at home and they needed a wash and the weather was almost cooperative, so maybe that counts?

I wasn’t an official participant, I know, and it’s probably true that dragging out some bit of me-made neckwear is not really a challenge, but I almost managed Me-Made-May. Were it a summer event, I could probably do it with tops (two Portia tops at least plus one or two others that are lurking about the place). I might have to make a more concerted effort in December, say, when I’d be in a with a chance of achieving more meaningful sewing and wearing things I already have in my wardrobe. Sure, I would once have breezed through May in handknits. But not any more. If you participated, how did you go?

Posted by Felicity from Down Under on May 31, 2012 in Crochet, Knitting, Sewing

← lavender bag tutorial
on the way home from the GP →