soon it will be winter and I’ll have to knit 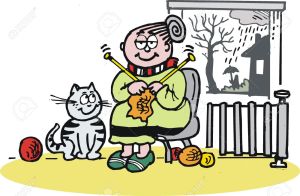 I can see it now. But what will I be knitting? And, no, I don’t actually have a cat.

You remember this was going to be a busy year with birthdays? It has been, and there’s another zero-ending one in the offing. Then we can breathe for a while before the usual slew of “not zero or anything particularly special” birthdays continues unabated. I think I’m off the hook for scanning photos with regard to any of the forthcoming numbers but there’s always something unexpected in store.

It’s frightening to think that it’s already March, nearly April and my creative efforts this year have so far been almost minus. When Dr B and YoungB were working in the backyard in 40-degree heat and I was concerned about their dehydrating, I fished out the sewing machine to make another of those cooling neck collars. Yeah, right. Something I don’t like about the Janome, as fabulous as it is in terms of variety of stitches and as good as it was for sailing over the loose-weave hessian, is that it’s a pig of a thing to thread. I had to re-thread it several times because apparently I was doing it wrongly. I sat there with the book in front of me, carefully following the diagrams. I redid the bobbin a few times, in case that was causing the difficulty. Nothing worked. I ended up putting it away and uttering a few impolite suggestions around behavioural change. And didn’t make the cooling neck collars. The Bs simply wore wet bandanas, instead.

It’s getting to the time of year where my fingers are itching to have knitting in them, so I’ve just revisited my Ravelry projects to see what’s awaiting completion that I could reasonably pick up in the expectation of finishing it without too much drama. There’s nothing. What isn’t finished is in the middle of serious tinking. To wrap my head around what’s necessary means being back in the knitting groove. And I’m not. So what do you reckon? is the only answer to start something new??

Posted by Felicity from Down Under on March 26, 2016 in Knitting, Sewing