so, uuh, yeah, about the beanie

I finished that beanie, as you can see. It was too large even for Dr B’s big head! However, I was able to gift it to a friend – whose head is even bigger and whose need for comfort was perhaps greater – so no harm done.

YoungB has a small head. I know that. I keep forgetting that I could knit a women’s size for him and it would fit. That’s more or less what I’m doing now, using a different shade of grey yarn. And I might knit something for Dr B if I get around to it. He’s not short of beanies, he just keeps losing them 🙂

Posted by Felicity from Down Under on April 30, 2016 in Knitting 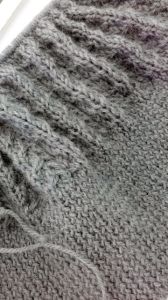 It’s called an Aran design, though as a cabled number it’s definitely understated

That was another week’s effort, achieved not so much by knitting on the bus, tram or train – or even in the lunchroom at work – as at home in the evenings. Only 11 rows remain, each of them of decreasing length, then it’s a matter of sewing up the back seam, tidying up those ends and blocking it and, voila, YoungB will have a new beanie. For once, he might have it before the cold weather really starts nipping.

Posted by Felicity from Down Under on April 17, 2016 in Knitting

that was last week’s effort

Almost done with the ribbing

The beanie is progressing. That’s reasonably accurate with regard to colour and, yes, I often knit at the table with a glass of wine readily to hand 🙂 I have also managed some steady commuter knitting, mostly on the train and one of my longer bus trips. I don’t know if it’s having the desired effect of keeping me sane, but it’s keeping me busy and perhaps that’s enough.

How’s your knitting coming along?

Posted by Felicity from Down Under on April 12, 2016 in Knitting

annual cycle of feast or famine

Dr B’s cabled jumper is still going, though perhaps not strong. I made it in 1988.

You know how it is. After the busy-ness dies down and life gets back to normal, you want to knit, but don’t have a project in mind. You can’t quite bring yourself to get back into the swing of tinking the existing projects (there are several, as I said last time). And then, into your email inbox – right on cue, just like last year – pops some irresistible temptation from Bendigo. Last year it was sock yarn that lured me. This year, it’s their latest, lovely, special yarn. The variegated colourways are attractive and there’s a black-grey mix. YoungB’s birthday jumper – in some pattern suited to the yarn, of course, not the original choice over which he dithered so much I gave up – looks like a winning option again. Quickly, before you change your mind, you dig out a fast, easy pattern and order the yarn. Well, that’s what I did, anyway.

Then Dr B and YoungB returned from visiting a friend, who continues to be remarkably impressed by the – now very old and falling to pieces, but too nice to throw out – jumper I made for Dr B during the first year we were married, and which he still wears because he loves it. As you can see, it’s riddled with cables, albeit at the lower end of complexity. Otherwise you die of boredom. Right? It is a nice jumper and I think it’s beginning to influence YoungB (who once refused to borrow it for a ski trip because of the cables; but who’s now experienced a truly chilly, Northern-hemisphere winter and has doubtless seen others wearing handmade jumpers of similar design).

YoungB then suggested that he’d quite like a beanie. With cables on it. I hauled out my trusty old Patons Book 483 Winter Warmers that I’ve been using for ever, and showed him a couple of patterns. He chose a Fair Isle one, pattern 17, as well as one with cables, pattern 18, after also considering pattern 22, which is the one I made for Dr C a couple of years ago. He and I shuffled off to our LYS to choose some yarn. I’ve been knitting for enough years to know that, as long as you buy reasonable quality yarn and ensure that it’s all from the same manufacturer – as well as the obvious colour and dye-lot matches, if it’s a single-colour buy – then you don’t have to buy the yarn specified. After looking at and comparing several different brands of pure-wool yarns, we picked out four different shades of blue for the Fair Isle beanie, and a grey wool and alpaca mix for the cabled number (I see it more as an obvious grey, he sees it as having a strong teal hue).

Now all I have to do is think of something quick and appropriate that I can make for a colleague’s birthday on Thursday, though I’ll start the knitting immediately and, fnigres corsesd, hope that I don’t get too many interruptions. Realistically, I’m likely to come to grief on the jumper but it IS a quick and easy pattern. The beanies will take time, but when you commute for the best part of three hours, five days a week, then time is not your main problem. It’s finding the dedication. Given that YoungB specifically asked for a beanie, and chose the pattern and yarn himself, then I dare say the dedication will be easier to find than it often is.

Have you reached the annual point where you simply have to have some knitting to keep you sane?

Posted by Felicity from Down Under on April 3, 2016 in Knitting