It’s a bit blurry, but there’s progress. Nothing exciting at all!

Posted by Felicity from Down Under on March 15, 2018 in Knitting

A bit wrinkled after more than two years in storage, but still looking fabulously festive 🙂

Middle Niece was married on Friday. The reception was held at her parents’ house, under a marquee on the back lawn. Among the decorations? The photo is a little blurry – phone cameras have their limitations, after all – but I’m sure you’ll get the general idea. It was lovely to see the made-by-me bunting adorning another celebration. This space was smaller than the previous one, with a steeper ceiling pitch, so the bunting appeared much denser and it certainly draped differently.

On the subject of matters crafty, I’m still knitting the scrappy scarf or shawl. It’s making progress. I’ve decided to embrace the knot. There seem to be many in the yarn I’m using and there’s a limit to my patience for dealing with them. My theory is that you’d be hard pushed to notice the occasional bump when the scarf is tucked under a coat collar, as is likely to be its final destination.

Also, I’ve booked to attend a beginners’ weaving course. It’s being held near the town where I grew up, so Dr B and YoungB will cycle the Riesling Trail (more info) while I learn all about looms, weft and warp and other wondrous new terms.

Whatever you’ve been doing, I hope your plans are all turning out exactly as you’d expected. Mine never do; but I hope yours are!

Posted by Felicity from Down Under on March 11, 2018 in Family history, Knitting, Sewing

revisiting your own past 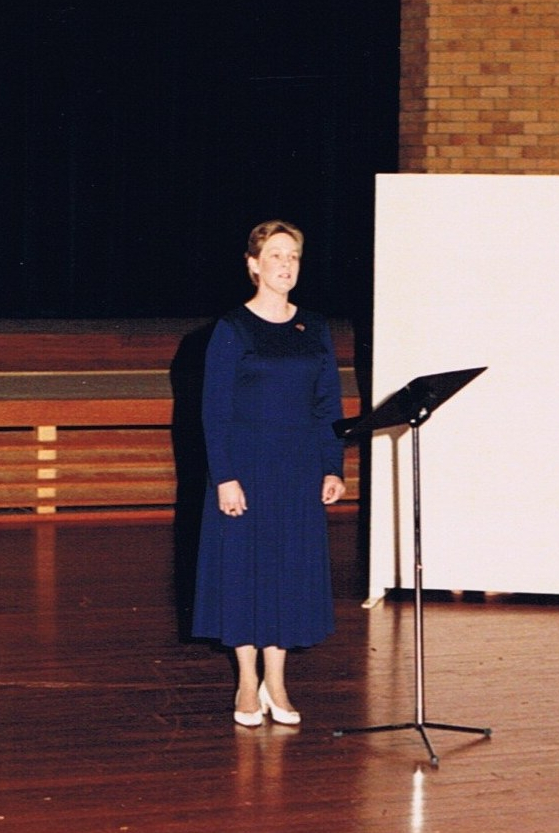 Sometimes, as the years slide past, you forget the details of the good things as well as the bad. In my case, the bad might include mistakes I sometimes made mid-performance but the good definitely includes how stellar some of my vocal performances actually were. Luckily for my memory and the possibility of sharing some of that splendour with possible future grandchildren, recordings can bring a reminder. A few months ago, Dr B and one of his old schoolmates were working on Dr B’s motorbike together. They’re neither of them entirely capable of staying on the point, so their conversation wandered from motorbikes and strayed across many strata of music composition and performance and getting inside the technical stuff; and their physical presence wandered from the shed into the house for some musical evidence.

Some of the recordings Dr B used to illustrate points were of me singing his music (that’s not uncommon). A couple of works I’d practically forgotten, it’s so long since I recorded them and I probably never performed them more than a few times anyway (they were to some extent experiments by Dr B and not well suited to my vocal range or timbre but I sang them anyway in the spirit of collaboration and because they were too beautiful to let such minor details deter me utterly). Dr B’s Songs for Ophelia remain perhaps the most spectacular things I have ever performed, with all sorts of wondrous vocal pyrotechnics whose sparkle and agility still have the power to surprise even me; and I was the one pulling them off.

I would perform them differently now for all sorts of reasons, not the least of which would be that my voice is considerably older and darker than it was then (1989 – 1990) and, because rarely used nowadays, distinctly lacking in the sparkle and agility. I reckon, though, I’d still get the kind of reaction from the audience that I got the other day from the old schoolmate: a recognition of something special. (And a chuckle from YoungB who reckoned the resulting warbles were remarkably akin to those produced by the damn magpies when they start up at about 4.00 in the morning, as we well know from years of being up at that hour for rowing training.)

Now, you’re probably going to ask where can you hear any of this spectacular stuff and, I’m sorry, I can’t upload without going Premium. That’s probably not going to happen on our single income, particularly when this blog is not an essential part of anyone’s life.

However, I hope I’ve added a link to the page of Dr B’s recording where the Songs for Ophelia can be found; if you have time to scroll down the page. Tomorrow is Saint Valentine’s Day is short – we’re talking 22 seconds – but stunning, if you’d like an idea of why I’m pleased to have unexpectedly revisited that part of my past (yes, unexpectedly because, in the normal run of things, you wouldn’t expect motorbike maintenance to end up encompassing the sharing of what are now close to vintage recordings).

I tested the link, and it worked for me. I hope it will work for you, too 🙂 And of course the photo is of me singing my little heart out to a sizeable audience. The recording was made at the Ultimo studios of the Australian Broadcasting Commission (usually referred to as the ABC, the Abe – think the Beeb – or Auntie). I believe the original recordings have since gone the way of the dodo in one of the many clear-outs; but note that the copyright was originally with the ABC.

Posted by Felicity from Down Under on March 2, 2018 in Motorcycling, Musing, Singing